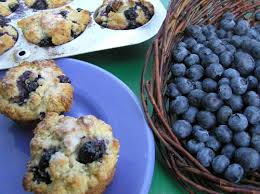 I’m very tiny or very gigantic, depending on how you look at everything. And I see myself travelling through a blueberry muffin. What I mean is, I’ve been trying to sleep for over an hour, but I taste the sweetness of God’s goodness and so, I can’t seem to sleep. I am departing my house at 4:45am tomorrow/today to head to the Redding airport in order to fly to Texas. I’m going to Texas as part of the ministry team for Bill Johnson while he does a series of 5 meetings at a church next to Austin. (http://www.churchofthehills.org/Bill_Johnson.html )And I would love to sleep, but I am inevitably meditating on my Father’s goodness, which is keeping me very excited and awake.

It’s like I am an itsy bitsy person inside a blueberry muffin. Yes, it’s just like that. Haha. And as I travel along, I eat the bread, which is okay, but I also chew into lots and lots of very succulent blueberries, which are astounding every time I run into them – even though it’s a constant encounter (after all, it is a blueberry muffin).

Sometimes His goodness keeps me up at night. And up at day too. Haha.

A couple weeks ago I was in Michael’s, the craft store, and I saw a hunched woman pushing her cart. I approached her and asked her what was wrong with her back. Pretty quickly she was crying and telling me about her father’s death and the deteriorating illness torturing her back and the rest of her bones. We talked for about 20 minutes: about hope and God and life and purpose. Her eyes opened and shut in awe, like a manual garage door that won’t stay up. We talked about dreams she has. And I got to pray for her back and her right leg, which was a center of pain. A lot of the pain left her leg, which she thought was really outstanding and then she said, “I think I am standing up straighter!” I laughed hard. Sometimes when people get healed it’s like you told the punch line to the joke, but the person didn’t get it until sometime later. When that person gets it, you laugh even harder, because the epiphany of truth looks so beautiful on them. “Wow, that truth looks so good on you! It really brings out your eyes!” I asked the woman if I could hug her and she very merrily accepted. She said something about the meeting making her day and her life looking up again, and then she said she would go the Healing Rooms at Bethel that Saturday for more healing prayer. That punch line really got her good. HAHAHAHAHAHA! GOOD. And sweetly, after the pain significantly left her leg I could tell she suddenly thought that the rest of what I’d said was probably true as well – the bit about God and life and purpose – because God demonstrated His goodness by tracking her down in Michael’s.

What a lovely blueberry.

Also about a week ago I saw a man in a wheelchair outside a building in Redding. I made eye contact with him and said, “hi.” He smiled back, but I saw tears creeping up in his thunderstorm eyes. “What’s going on?” I said, walking toward him. “I’m dying,” he answered, rain clouds in his soul darkening. “What do you mean?” I asked. “My heart is detaching from the rest of my body and the doctors say I’ll probably die soon” he abruptly responded. “Well, that’s ridiculous,” I said, looking him in the eyes, pushing back the darkening with the violent light inside me. “I’ve seen lots of people healed of lots of things. Do you want me to pray for you?” I asked. The clouds in his eyes dissipated, as if he was presented a new option he had not considered. “Yes” he said. And I prayed. And I asked him how he felt. He told me he felt much better, like maybe his life would be long. I told him everything changed that day, it was a new year and he would live in full health. I explained that I had to go because I had an appointment to keep, but I blared sunlight into his sky with the words, “You are incredible. You are going to have an incredible life” and then I clapped and cheered for him. And I went inside.

What a wonderfully sweet blueberry.

Recently I had to call my internet provider because we were having technical problems with our internet service. After about 20 minutes of back-and-forth about our internet connection, we resolved the problem. She said, “Is there anything else I can do for you today?” I responded, “Well, this might seem odd, but do you have a son?” “Yes…” she responded, not knowing what else to say. “And are you having difficulty with him lately and you don’t know what to do?” “Yes, how did you know that?” she said, her voice growing hushed and shaky. “Sometimes God shows me things about people and I feel like God wants to encourage you that He is moving in your son’s life. Even though you  feel stuck, God is bringing order. And God has a purpose for your son. I see him drawing and He hasn’t found the right use for his drawing yet, but soon he will be at a youth center teaching others to draw.” The woman began to cry. “My son is 16 and he has autism and just this morning we had a huge argument and I don’t know how to deal with him anymore. I was just asking God today for some direction or something because I feel like I can not do anything to help him and I feel overwhelmed because I am working so much and his father isn’t around anymore and it’s so hard for me to raise him alone.” “Wow” I said, feeling every high and low point in both w’s, compassion buckled me in like a seatbelt. I told her I knew of autism being healed and I asked if I could pray for her son. She leapt from weary mom voice to strong mother hen voice, “Yes! Please!” I prayed for her son and prophesied over his life. She cried and said, “I just don’t see how you know all these things…” “It’s just God. He shows me things about people He wants to encourage. He wants you to know you are a great mom and He loves you and your son very very much; and hope is real.”  I told her a story from the Bible and she said she would look it up later. Our conversation lasted about 15 minutes and by the end she had transitioned from a faceless customer service operator to a courageous mother who was holding out hope for her teenage son to find fullness in life. I was honored to “meet” her. We exchanged names and thanks and laughs and said our goodbyes.

What a sensationally serendipitous blueberry.