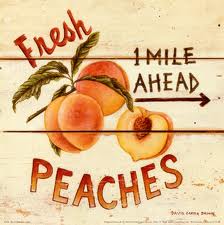 Anna loves fresh fruit. She talks about fruit so much, one might think it’s all she eats. She especially loves peaches. They are by the longest, biggest, most immeasurable measurement, her favorite. There’s really no comparison. And thankfully, there is a fresh produce stand at the end of her street from which she can get fresh fruit any time of night or day. Yes, it’s a 24 hour fruit stand.

“Well, why don’t you just walk down to the corner and get one?” Sylvia asked.

“Oh, I don’t know…” Anna said. “Maybe a friend will bring one by. Or maybe the man who sells them will come door to door, every couple months he does that. I can wait. ”

And so, hours of the day passed and every now and then Anna mentioned again how much she could barely stand her want of a peach. She even described the loveliness of the peach to Sylvia.

Sylvia was confused, “If you want a fresh peach so much, why don’t you want one enough to go get one?”

“I mean, it’s a five minute walk. Why do you keep going on about wanting a peach? If you REALLY wanted one, you would just go get one.” Sylvia explained.

“What?” Sylvia answered. “This is ridiculous. You act like you can’t live without a fresh peach, but you don’t want one enough to just go get one! Your words and your actions don’t line up. Stop talking about the peach already, GO GET ONE!”

Anna sat down and thought about it. She grabbed a book about peaches and decided to read for while to “quench” her desire for a peach. Hours later she went to bed, with little more than the idea of the peach in her head, and nothing of the peach in her belly.

She wanted a peach enough to want one, but not enough to get one.

That’s how we are with God – much too much of the time.

We want to want Him, but we don’t want Him enough to get Him.

And how much more absurd would Anna’s story be if that fresh peach was on a tree in her yard?

What if it was in a bowl on her kitchen counter?

What if it was in her hand?

And still she talked of wanting a peach, but she didn’t eat the peach she had?